The Real Kind Of Self-Esteem Or: What My Toilet Taught Me 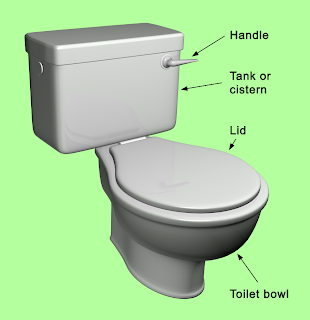 It's 12:13 am. I'm just drifting away to sleep when I notice a familiar sound... the toilet is running... Now, I'd grown accustomed to the soft whisper of trickling water over the past few days. I knew deep in the recesses of my head that something was up with it, but I did nothing. Hoping it would magically fix itself. "It just needs to adjust..." I said to myself, completely aware of how irrational I sounded.

But this wasn't the light trickle I'd become so good at ignoring. This was a loud, perpetual swoosh! that could be heard from every corner of my apartment. It'd been muffled by the TV, but now that I was trying to get to sleep, it invaded my ears like... like some loud infuriating sound... stay with me.

I got up and paced up and down my apartment. Then I did what I always do when I don't know what to do, I opened the fridge and ate some pudding (I refuse to admit to emotional eating... but yes, I was emotionally eating). My mind raced with frustrated thoughts, "This doesn't happen to people on TV!" Like only things that happen in sitcoms are acceptable in life. "Friends didn't prepare me for this! Where's Joey when you need him?!" I was actually fighting back tears. Nothing makes you feel more helpless and alone than when an appliance you took for granted breaks down. The world stops making sense. It's like everything you knew for sure is up for debate now... Is the sky really blue? Are leggings pants? Do spiders think?! I didn't want to be that girl who cries when something inconvenient happens. "I'm not five years old!" I yelled in my head.. "I'm completely capable of handling this. I'm an adult. Adults do this kind of thing all the time, right?"
So I called my dad.

Being the wonderful patriarch he is, my father told me to shut off the water valve, the location of said water valve, and which way to turn it, "remember honey? Righty tighty... lefty?" ('cuz apparently I'd become a bumbling idiot). And came over a few hours later with a new toilet repair kit.

I was incredibly thankful he'd come to save the day, but I couldn't shake a feeling of regret. I kept apologizing to him. I was angry for some reason. Still, he came, he fixed, he conquered. Like always. Since I was a child, my dad was my hero. He could fix anything, he always kept his cool when my emotions got the best of me, and I loved him for it. But this time was different. I was mad at him. I wished he hadn't made it so easy for me... I'd wanted him to tell me to fix it myself.

It was at that moment I realized the biggest thing ever. I didn't want to be dependent on other people anymore! I didn't want to be the damsel in distress any longer. Could it be, that I was finally growing up? I'd wanted to open the toilet tank and get my hands dirty. I'd wanted to make a mess, and google toilets, and drive to the hardware store myself, and figure it out! For me.

But I didn't. It was easier to pick up the phone. And now I hated myself for it. Still, the toilet was fixed. And isn't that what matters? I tried to let it go.

Luckily, that night the familiar trickling sound was back. This time I left the phone on the night stand and did it myself. It was gross. Have you ever seen the inside of a toilet tank? Not lady-like. But who's to say what ladies do anyway? So I straddled the toiled tank and got to work. I tinkered, I tested, I googled and shmoogled, until finally the trickling sound was gone. I flushed the toilet and watched it fill back up. I took a shower to get the gross toilet smell off me. And I felt amazing. Who would've guessed something as mundane as learning to fix a running toilet could go so far for my self-esteem?

I think we put waaayy too much emphasis on the way we look. When we hear "self-esteem", we automatically think it's about liking how we look. "You feel bad about yourself? Let's do a make-over! What you need is.. to get your nails done, girl!"

While the healing qualities of a good manicure have been well documented, maybe what we really need is to learn to trust ourselves. To know that we can tackle anything that comes our way. That we can do all those gross, difficult things we were taught were "dad's job". That we're people, and we can do anything we have to.

I guess I hadn't realized just how entrenched these gender roles were inside me until I had to fix a toilet. Thank you, annoying toilet that keeps breaking down. You've taught me so very much. I hope my sink gets clogged next week.
Posted by Ana Lugo at 12:26 PM No comments:

Email ThisBlogThis!Share to TwitterShare to FacebookShare to Pinterest
Labels: how to fix a running toilet, humor, life questions, Rants, self-esteem

I'm not a big shopper. I don't go on weekly shopping trips or spend money on frivolous things... usually. But! Money is, after all, just money.. and if you happen to have a little bit extra, I say spend it on something that makes you smile... life's too short not to, people!

So this week I went on a celebratory online shopping semi-spree. That is, I bought 3 things. Three things I don't need, but really wanted. Three things that made me say "Yay!" when I saw them, and "Yay!" again when they arrived in the mail. It was glorious. I want to share these three things with you, to encourage you to reward yourself once in a while. We all work super hard for the things we want in life, we should give ourselves some room to have fun too. A little frivolity never hurt anyone. Actually, it can go a long way to reaffirm our humanity. 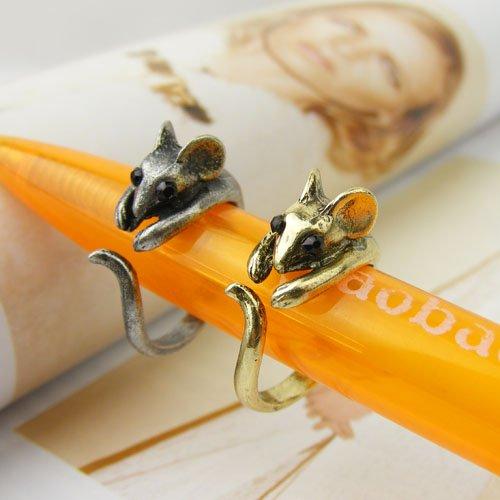 Aww! It arrived this morning.. so cute! I had a pet mouse named Zesty when I was in high school. I found him while browsing at PetSmart one day. He had a skin condition and was losing his fur. I asked the guy if I could buy him, and the cashier let me have him for free. After a vet visit and some ointment, he was good as new. This ring reminds me of him. The little guy lived a happy mousy life and would always help me clean his cage. He would push all the straw to one end of the cage so I could pick it up easily... This one's for you, Zesty!

I got these at Payless... yeah, I did. Christian Siriano does not play games... I cannot wait to wear these.

It's no secret that my favorite show of all time is Adventure Time. My affinity for it borders on unhealthy. I just, like it a lot! I don't normally buy clothes depicting things I like. I feel like it shouts stuff... "Aaah! Ilikethisandyoushouldlikeittoo!" But you know what, I really enjoy this sweater, so I bought it. It makes me smile every time I wear it, and how could that be bad?

I hope next time you find something you really really like (and can afford), you just go ahead and buy it. Who cares, you know? The point of being alive is to be happy... it's in the Constitution, for god's sake.. so let's make our forefathers proud and buy the next silly thing that makes us all jolly inside.
Posted by Ana Lugo at 11:50 AM No comments:

Gauze! by alugo9824 on GoAnimate

Video Maker - Powered by GoAnimate.
Posted by Ana Lugo at 3:22 PM No comments: