The Importance of Eyeballs 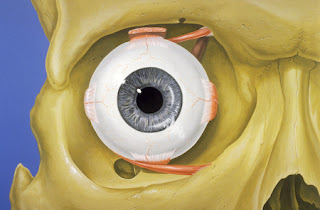 I was sitting on the couch, ranting about something to my very good friend... talk talk talk, look up, look down.. and then suddenly I caught eyes with him and burst out laughing. The truth was, the problem I was ranting about wasn't a problem at all... it was just me being a dramatic idiot, as I've been known to be, and watching my best friend's eyeballs staring back at me showed me that. It showed me a reflection of myself,
all agitated and silly, shouting about some inane situation... and it really made me laugh.

That's the importance of eyeballs. They show us who we are. And it really doesn't matter if they're a person's eyeballs, or your dog's, or even a stuffed animal (yes, I've spent hours explaining the complexities of my life to a stuffed frog pillow named Sherman). The point is, sometimes we need to look at someone else to truly see ourselves. Especially when we're overwhelmed by emotion. There are few things more comforting than seeing a trusted face looking back at you, saying "ok."

But why is that? Why is it not enough to talk to ourselves? I think it's because sometimes we can lack perspective. We live inside our own bodies 24/7, and it can all get a bit convoluted after a while. Ideas become reality, all those what ifs, all those goals we set for ourselves, what we think we're supposed to be, our failures and our successes.. All those feelings can get jumbled up, and before we know it we're sitting in a corner, chewing our own hair (not that I've ever done that).

Sometimes it takes someone else to remind us of who we really are. Just one look at someone who thinks you're pretty all right, and things start looking up. The fog clears, and that thing your boss said yesterday sounds really petty... because actually, it kind of was.

So let's not ever take eyeballs for granted, you guys. Let the owners of those eyeballs you hold dear know that you appreciate them, that the green specks and blue irises are highly regarded by you, and have in fact made a real difference in your life. That the subtle golden notes around the pupil are not lost on you. Except maybe don't say it like that, you might make them a bit uncomfortable...
Posted by Ana Lugo at 3:39 PM